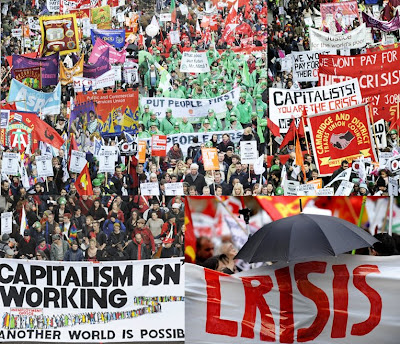 Come to London’s biggest ever street party!
On Financial Fools Day, The City of London will form the backdrop forthe biggest mobilisation of the people since more than a million marched against the illegal invasion and occupation of Iraq.

Thousands and tens of thousands are expected to take to the streets to coincide with the G20 summit of world leaders who are flying into London. The same bastards who got us into this mess are trying to pull the biggest April Fools trick in history – to pretend that the globaleconomic meltdown can be fixed and they are the ones best qualified to do the fixing. To get away with this effrontery, these bankers will do all they can to mask themselves with the charisma of Barack Obama, due to arrive here that morning. We’re not fooled.

We have global economic and environmental meltdown. We have home repossessions and unemployment spiraling out of control. We have unjust wars. And for what? Presidents and premiers are plotting to shore up the tottering capitalist system to ensure business as usual and wealth creation for the few, at the expense of the many.

That’s why a lot of angry people, hardworking taxpayers, activists, pensioners, the unemployed, people who’ve lost their homes and savings, small business and shop workers, and all manner of victims of the economic collapse are joining forces in new and powerful coalitions to express their rage. On Financial Fool’s Day, we will take our protest to the belly of the beast: the Bank of England in London’s financial square mile.

On 1st April at 11 a.m. parades will join up at four railway stations around the edge of the square mile – Liverpool St, London Bridge, Cannon St and Moorgate – and snake their way though the City to converge at the Bank of England for 12 noon. Each procession will be headed by one of the Four Horsefolk of the Apocalypse, commanding their forces against
1) Climate chaos (Green horse, Liverpool St),
2) War (Red horse, Moorgate),
3) Job/savings/pensions losses (Silver horse, London Bridge) and
4) Home repossessions (Black horse, Cannon Street).

G20 Meltdown calls for as many people as possible to join us for Banquet at the Bank, bring food, fun and games to share – a very rare delicacy will be served, bankers brains! If you want to Eat the Bankers join the Silver horse in a zombie block!

The Trial of Capitalism, for crimes against the planet – send’em to the gallows, politicians, war criminals and bankers hanging from every lamppost! If you want to press the charges for war crimes join the Red horse!

The Rainforest arrives in the City, Giant anacondas up the pillars, macaws shitting on the statues, polar bears on melting icebergs. Join the Green horse in animal mask or bring greenery for gorilla invasion of the urban jungle!

The World Turns Full Circle, The 360th anniversary of the Diggers, English Revolutionaries for the Earth, a ‘Common Treasury for All’. Join the Black horse with diggers’ spades to celebrate!